A Gentle cuckoo that had built her nest in the pine tree in the front yard, was sitting quietly upon her eggs one morning when suddenly a four-footed visitor appeared upon the scene. His visit was not a friendly one, and the seemingly helpless bird lay prostrated beside her nest while the robber red squirrel regaled himself with the contents of her freshly laid eggs. Human intervention came too late, so that the poor helpless cuckoo, paralyzed with fear through her lack of conscious ability to cope with her adversary, deserted her nest never to return.

The experience brings a lesson to us all. How often have we given way to the enemy in just the same way, because unconscious of our God-given power of resistance! How often have we allowed fear to control, and lost sight of the fact that divine Love is ever present to cast out all fear! A few well-directed pecks by this cuckoo would have saved her this loss. She had the ability to dictate terms to her invader, but she was not conscious of this fact. Had a crow attempted to rob a king-bird's nest, he would have soon parted with some of his feathers and beaten a hasty retreat. The king-bird stands as a type of fearlessness and conscious power. He knows, he acts quickly, he conquers. 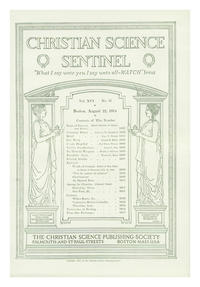