More than two thirds of the work required to bring water to Los Angeles, Cal., two hundred and fifty miles across the Mojave desert with its Death valley, under the Coast range and into Fernando valley, has been completed. The city is doing the work and it will cost less than the estimate of twenty-five million dollars. Along its way the water will generate one hundred and twenty thousand electric horse-power, and three hundred million gallons of water can be delivered daily in the dry season to the city for domestic and manufacturing purposes and for irrigation. The city has built its own hydro-electric power plants, manufactures its own materials, has perfected an admirable organization, interested the whole population in the work, and by skilful fostering of emulation among the construction sections, has secured a degree of efficiency by which all records of tunnel construction have been broken once and again.

"It the carriers can prove that they are entitle to an advance they ought to have it. If it can be proved that they are not entitled thereto, they should be denied." With this statement Judge Brown, chief examiner of the interstate commerce commission, opened the hearings in New York city into the question of increases in freight rates in the territory north of the Ohio and the Potomac and east of the Mississippi river. The railroads have asked for increases averaging sixteen per cent, which, it has been figured, would cause an advance of half a billion dollars in freight rates for the affected territory.

Send a comment to the editors
NEXT IN THIS ISSUE
Article
"MORE THAN CONQUERORS." 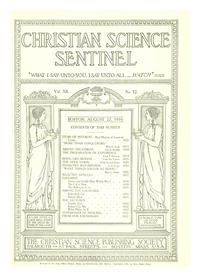