The differences between the United States and Panama, which made necessary the visit of Secretary of War Taft to the Isthmus, have been settled by the issuance of an executive order signed by Secretary Taft for President Roosevelt and assented to in a letter by President Amador of Panama. The order provides that no trade for the canal zone or the republic of Panama can enter the ports established by the United States at either end of the canal, supplies for the construction of the canal and articles in transit being excepted. This turns the customs receipts of these ports over to the Government of Panama. Absolute free trade is to apply between the Canal Zone and the republic of Panama. Complete jurisdiction is granted the United States in the harbors of Colon and Panama as to sanitation and quarantine regulations. Panama reduces her rate of postage to two cents. The order of Secretary Taft is to be ineffective unless Panama shall put into effect the gold standard, according to the currency agreement of June 20, 1904.

Extension of the Rural Free Delivery Service has resulted in an increase of 1,125 in the number of postoffices discontinued during the fiscal year ended June 30, 1904. During the year there were 2,549 postoffices established and 5,587 discontinued. The total number of discontinuances was 3,750 postoffices, with a saving in salaries of postmasters aggregating $171,121. At the close of the fiscal year there were 71,131 postoffices in the United States—265 first class, 1,204 second class, 3,896 third class, and 65,766 fourth class. It is likely that twelve hundred routes will be reported within the next two months. An appropriation of $3,000,000 for the establishment of new routes will be asked by the department for the fiscal year ending June 30, 1906. There are now in operation 28,073 routes. To maintain service on these routes during the fiscal year from July 1, 1905, to June 30, 1906, will require $21,360,000. 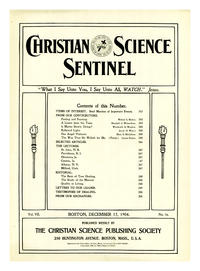