Christian Science does not rest upon psychological laws,...

Christian Science does not rest upon psychological laws, as the critic surmises, but upon those very laws of God, which are properly described as "immutable, undeviating in their effects." Plainly, then, if the individual can avail himself of these changeless laws, he will be governed harmoniously, and such government will be scientific in the best and fullest sense of that term. Jesus healed according to law. His practice was scientific, because it was unerring and precise. He never failed. Therefore his practice was Christian practice, and the science of his practice was necessarily Christian Science. The effects produced to-day, in the beginning of the twentieth century, in the healing of disease by Christian Science, are traceable to the same undeviating laws which Jesus made use of. They are just as available to-day as they were in his day. The laws which heal are not new. Our individual understanding of them is new for us. The healing to-day is not perfect, simply because mortals have not the full understanding of God's eternal laws, as Jesus had. Christian Scientists are honestly striving for the same Mind which was in Christ Jesus, for we know that it is that Mind which heals. Willard S. Mattox.Putnam (Conn.) Patriot. 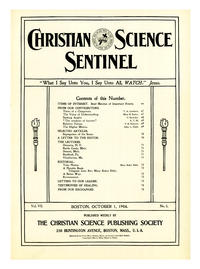