The International Customs Congress of American Nations convened last week in New York. The prime purpose of the conference is to call attention to the desirability of closer commercial relations among the American republics. Representatives of the Argentine Republic, Bolivia, Costa Rica, Argentine Republic, Bolivia, Costa Rica, Cuba, Ecuador, Guatemala, Hayti, Honduras, Mexico, Labrador, Venezuela, and the United States were present when the congress was called to order. The congress is to consider the commercial systems and trade regulations of the various countries in order that unnecessary charges and restrictions may be removed, and in order that laws affecting the vessels and the handling of merchandise may be so fixed as to give the greatest convenience in commercial intercourse.

No agreement has as yet been reached in the Panama Canal negotiations as to the amount of annuity that the United States shall pay. Colombia rejected as insufficient the offer of the United States to pay a lump sum of ten million dollars and an annuity of ten thousand dollars, or a lump sum of seven million dollars and an annuity of one hundred thousand. Colombia's demand for an annuity of six hundred thousand has been refused,a as also her proposition that the treaty covering the points upon which agreement has been reached be signed and the question of annuity be referred to The Hague Court for arbitration. This would bring the question into the Court eight years hence, two years before annuity payments, according to the present agreements, would begin.

Send a comment to the editors
NEXT IN THIS ISSUE
Article
Mrs. Eddy Replies to Mark Twain 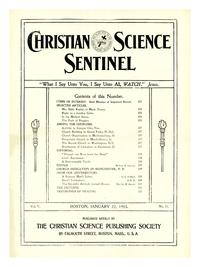