From the days of the Patriarchs to the present, the people who taught the omnipotence, omnipresence, and omniscience of God—God as all-power, everywhere present, and all-intelligence—have met with ridicule and opposition, and yet this stone which has been rejected by the carnally-minded has become the head of the corner in the foundation of the governments of the civilized nations of the world. It was this idea of Truth that led the Pilgrim Fathers to seek refuge in this country, and to establish a nation recognizing that "God has endowed man with certain inalienable rights, among which are life, liberty, and the pursuit of happiness," and which in 1866 protected one lone brave woman in promulgating and establishing primitive Christianity accompanied with Christian healing. This has met with opposition, but the Christ-healing taught and practised by Jesus of Nazareth will become the head of the corner—will be the universal panacea for sin, sorrow, and all the ills of the flesh.

The same glad song of rejoicing that ascended unto God in the days of Jesus and the apostles for the Christian healing experienced, is to-day ascending unto the Father from thousands of happy homes for the blessings received in Christian Science. 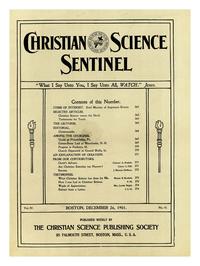