The annual report of Navigation Commissioner Chamberlain is devoted mainly to statistics and facts in support of the project for the creation of the American merchant marine recommended by Secretary Gage. Excluding the Great Lakes, practically shut off by Niagara Falls from foreign competition, the tonnage of vessels entered and cleared at seaports of the United States in foreign trade for 1897 comprised 7,248,625 tons American, and 32,632,419 tons foreign shipping. If a line be drawn everywhere fifteen hundred nautical miles distant from our seacoast, trade between foreign ports inside that zone and the United States comprised 5,179,969 tons American and 5,213,393 tons foreign shipping. In over-sea navigation to foreign ports, more than fifteen hundred miles distant, American shipping amounted to only 2,068,656 tons, compared with 27,419,026 tons foreign. 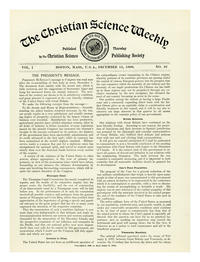