Prayer at work harmonizes and heals

Last year when I learned of a need for staff in the meat department of a local supermarket, I decided to apply for the job. I had worked my way through college in butcher shops, so I felt well qualified and was soon hired.

On my first day at work, I learned that it would be just the manager and me running the shop. The tasks included unloading pallets and filling refrigerated cases. The work was physically demanding, and I was given no instruction. I learned mostly from trial and error, usually after unpleasant reprimands.

It was soon evident that my new boss had a volatile temper. Arguments erupted frequently. Some employees refused to interact with him, and there were times when customers vowed never to return. I tried to smooth ruffled feathers but wasn’t always successful.

One day in the employee lunchroom during a break, I was asked how I liked working with my manager. The room grew silent, with heads turned in my direction to hear my response. When I mentioned something positive, the room erupted in laughter. Later I found out people were betting on how long I’d last in the job.

I was indeed often tempted to quit, but I knew the situation could be healed. I really wanted to serve our community, too, not just to fill an employment need but to glorify God. I prayed to see my manager as a loved child of God, just as I identified myself, and I vowed not to take offense over angry outbursts and unjustified accusations.

Most helpful to me at this time was a passage from Miscellaneous Writings 1883–1896 by Mary Baker Eddy: “Know ye not that he who exercises the largest charity, and waits on God, renews his strength, and is exalted? Love is not puffed up; and the meek and loving, God anoints and appoints to lead the line of mankind’s triumphal march out of the wilderness, out of darkness into light” (p. 130).

From this inspired perspective I began to appreciate my manager’s talents. Not only was he conscientious, coming in to work early and leaving late, but he was also efficient and skillful with dozens of special orders that flowed into our shop. Certainly these qualities were evidence of his true, spiritual character.

Every day I looked for ways to express more patience, lovingkindness, and joy. In turn, the customers responded with much appreciation. During one particularly busy day when the manager was out, a problem came up with a customer’s very large special order. I didn’t know how to resolve it, and the customer grew impatient and agitated. I decided to take a break from the commotion to pray. I humbly asked God for help, and a solution to the problem came to mind quickly. The customer left satisfied, and I was glad that the need had been met.

When the manager returned the next day, I mentioned what had taken place. He told me that this customer ran a restaurant and that I had handled her situation just right.

That was the turning point in my relationship with the manager. From then on our conversations were cordial, and I began to get constructive rather than angry feedback concerning my work. He would now look at me when he spoke to me, and when I left for home at the end of the day, I frequently heard, “Excellent job!”

I noticed that his tone was softer toward others as well. And not long afterward a customer came in with a home-cooked dish for our manager made from meat purchased that week.

This was all very gratifying to me, but the blessings went even further. At some point during this employment experience, I realized I had been able to kneel on a hard linoleum floor with no discomfort, even over an extended time. This was something I had been unable to do without acute pain for over a decade.

In addition, I noticed that both my feet were of normal size and shape. The swelling in one foot from a spider bite that had plagued me since young adulthood was now completely gone.

How grateful I am for this opportunity to demonstrate the healing truths of Christian Science! 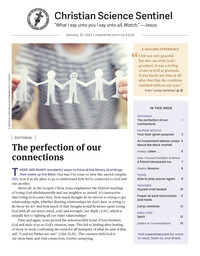