Start with the solution

One very encouraging aspect of studying Christian Science is that it offers a solution to any type of problem. From individual concerns to global ones, this Science offers divine Truth to correct the situation.

Christian Science does this by starting with the solution, reasoning intelligently from the basis of the allness of God—of God’s divine presence and eternal control as the one Mind, the only true cause of existence. When we glimpse the truth of God as the only Mind—the Mind of man and the source of all being—we begin where Christ Jesus did. He understood the allness of God, divine Spirit, and his teachings and example show that “to begin rightly is to end rightly” (Mary Baker Eddy, Science and Health with Key to the Scriptures, p. 262).

In fact, Jesus was so conscious of Mind as the source of reality that he could prove the presence and power of God by canceling the effects on individuals of believing in mortality. No matter what human problems were brought to his attention, Jesus was never influenced by the pernicious belief in a material world filled with mortals coping with mortality. Jesus’ fidelity to the spiritual understanding that there is only one Mind and its expression, man, rather than many competing independent mortal minds, brought him success in healing.

Mrs. Eddy, the Founder of Christian Science and a devoted follower of Jesus, explains, “. . . mortal mind must waken to spiritual life before it cares to solve the problem of being, . . . but when that awakening comes, existence will be on a new standpoint” (Science and Health, p. 556).

The new standpoint Christian Science illumines is that Mind is All, and matter is not. When I was in a serious bike accident over twenty years ago that left me initially unable to walk, that was the idea that came clearly. Starting with the allness of God, Mind, and delving deeper into the powerful truth of this enabled me to focus on what my heart yearned most to understand. I wanted to know the depths of Mind, and as I held to this desire, I forgot about the seeming mess of matter. I was fully healed of my injuries in a few days, and a few months later, I couldn’t even remember which knee had been affected.

Even a glimpse of God’s allness enables us to become more conscious of our unity with Mind as Mind’s reflection—this is the real, already existing, solution.

Man’s true being as the idea of God isn’t ever involved with a problem. Therefore, the solution is not to fix a problem but to realize the reality of what truly is: the presence of Mind, God, and the absence of anything else.

Even a glimpse of God’s allness enables us to start to see the infinite possibilities of reflecting this Mind and to become more conscious of our unity with Mind as Mind’s reflection. This is the real, already existing, solution.

As stated in one of this week’s feature articles, “An economy of ideas,” when we turn our thought to Mind—intelligence itself—“inspired ideas begin to flow and give us useful and relevant direction” (Manette Fairmont). Suggestions—from standpoints ranging from the political, academic, or social to the medical and psychological—abound for solving myriad problems facing humanity. But, while “human belief has sought out many inventions, . . . not one of them can solve the problem of being without the divine Principle of divine Science” (Science and Health, p. 273).

No matter how long we might appear to wade through human life and its complexities, we must return again and again to the solution that God is the only Mind. A Christian Scientist endeavors to solve problems by starting with God and yielding to the Christ, the true idea of God, forever dwelling in thought. The effect of this conscious awareness changes our experience because the Christ-spirit impels the recognition and demonstration of heaven.

Our natural state of being is to experience this heaven—the forever reality of our oneness with the divine Mind—in such qualities as justice, health, peace, mercy, goodness, and equality. Perhaps this is why Jesus described himself as “the Son of man which is in heaven” (John 3:13).

We can thank God for the solution even before we see it played out in words or actions. As the Christ stirs individual hearts to motives and acts of generosity, kindness, innocence, and love, we gain a taste of heaven, of the reality of man being the outcome of divine Mind. Prayer starting with this spiritual fact clears the way for God, the Principle of divine goodness, to be felt in all corners of the world. To begin with the solution is the solution, and we find God’s divine goodness to be the only reality, right here and now. 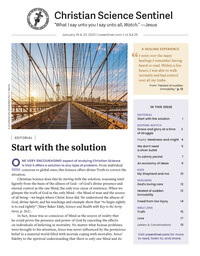