Not fearing, but revering God

How I prayed when a disastrous conflict seemed imminent.

It was 1962, and much of the United States was gripped by fear, knowing that the Soviet Union was in the process of installing nuclear missiles on the island of Cuba, just over 100 miles from US shores. Although the US government was negotiating with the Soviets, the threat felt very real, and people across America were building bomb shelters, fortifying basements, and stocking up on food. The news media conveyed a conviction that a disastrous conflict was imminent, and many were afraid for the future.

As a new student of Christian Science, I was learning that God is in charge and is more powerful than both weapons and fear. However, I lived in Albuquerque, New Mexico, where we were warned that there were nuclear materials and perhaps bombs in the nearby mountains and that our city was sure to be a prime target, should there be a conflict.

One morning I was in our tiny bathroom with our two-year-old daughter when all at once we heard the shriek of what sounded like a siren; the noise filled the room. Panicking because I thought that this was a warning siren and we needed to take cover, I grabbed my daughter, put her on the floor, covered her with my body, and started to pray. After what seemed like an eternity, the noise stopped. When I opened my eyes and could think clearly again, I realized that the sound had come from the telephone, which I had brought into the bathroom. It must have been left off the hook for a while, and the shrill noise signaling this echoed in the tiny room.

I cherished these insights into the word fear and began to revere God more as the only power.

I felt silly for having reacted as I did and immediately realized that I had to address my fear. I decided not to seek answers in the news, or try to follow every snippet of the negotiating process, or feel the need to know the number of weapons possessed by each country. Instead, I turned to the Bible and to Science and Health with Key to the Scriptures by Mary Baker Eddy.

I knew that Christ Jesus had proved what he trusted and taught about God and that he had promised his followers that they would be comforted (see John 14:16). My experience that morning had been anything but comforting, but I certainly wanted comfort and to not react fearfully or impulsively. I decided to research the word fear from a spiritual basis.

The Bible encourages us not to be afraid, and many Bible stories show people overcoming fear and triumphing over fear-inducing situations. The ninety-first Psalm assures us of our safety from mortality and evil and from the fears associated with both.

As I dug deeper in my study, I discovered that fear is also an important word concerning our relationship to God. In Proverbs we read, “The fear of the Lord is the beginning of knowledge” (1:7), and “The fear of the Lord tendeth to life: and he that hath it shall abide satisfied; he shall not be visited with evil” (19:23). These passages caused me to consider more carefully dictionary definitions of the word fear, which include reverence, respect, veneration, and even awe. So, these verses could be seen as counseling people not to be afraid of God, who is Life and Love, but to revere Him.

Jesus told his followers, “Fear not, little flock; for it is your Father’s good pleasure to give you the kingdom” (Luke 12:32). And he proved this to be true by remaining safe in some dangerous and threatening situations—on a boat in a tempestuous sea, on a cliff when pursued by an angry crowd, and in several other instances.

I cherished all these insights into the word fear and began to revere God more as the only power. My prayers were not only to address my own fears but also to help heal the fear that was being felt in our country at the time. Mrs. Eddy writes: “Good thoughts are an impervious armor; clad therewith you are completely shielded from the attacks of error of every sort. And not only yourselves are safe, but all whom your thoughts rest upon are thereby benefited” (The First Church of Christ, Scientist, and Miscellany, p. 210). I felt assured that my family, our city, and our country were safe.

I felt the presence of the Comforter Jesus promised, and I was confident that no war was imminent. I stopped reacting to fear, and I knew there was no need for us to fear one another because God, Love, governs all. Several days later, negotiations resulted in the missiles being dismantled and removed from Cuba.

Since then, when I hear about conflicts around the world, I ask myself, “Which concept of fear will I embrace in my thought?” I am so grateful for the awakening that I had that day so long ago to a better understanding of fear as revering God. I know I do not need to be afraid. Instead, I can stand confidently in awe of God’s love and power, knowing that these will always win.

Send a comment to the editors
NEXT IN THIS ISSUE
TeenConnect: Q&A
Love myself? Is that even possible? 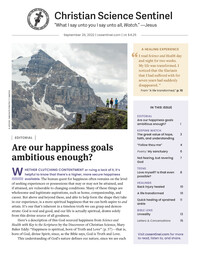