The only thing left was Love

How things had changed! When I was twelve, I’d joined The Mother Church, The First Church of Christ, Scientist, in Boston. At thirteen, I was considered dependable enough in my grasp of Christian Science to substitute teach younger Sunday School students. I loved spiritual truth and was devoted to it. 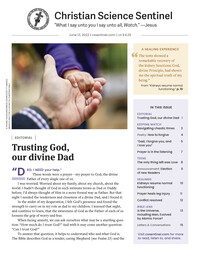