When something seems impossible to fix

It didn’t feel right to resign myself to living with a heart full of hurt.

One Friday afternoon as my dad started his drive home from the middle school where he was teaching, he saw a kid sitting on a wall in the parking lot. Dad felt something was wrong, so he went back and asked the boy if he was OK.

The boy told him he had nowhere to go. His mother had left when he was a baby, and the grandparents he had been living with had now passed on. He’d been sent to live with his father, but his father had just been arrested. And since his father hadn’t paid the rent, the landlord would not let the boy into his dad’s apartment. 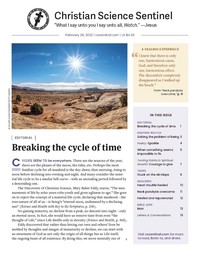