My expectation of good was explained

On our first date, the woman who later became my wife asked me, out of the blue, “What do you think about God?” My answer was brief: “Not much!”

I had been raised in a traditional Protestant church, and during high school had become disenchanted with what I was learning there. Later, while in college, I decided that after I finished school I would spend some time seriously considering my relationship with God. After doing so, I concluded that while the moral precepts espoused by my religion made sense, a God who created and allowed all the sin, disease, lack, unhappiness, and death that we see in our daily lives did not make sense and wasn’t who or what I needed to spend time with.

Send a comment to the editors
NEXT IN THIS ISSUE
TeenConnect: Trending
Searching for direction? 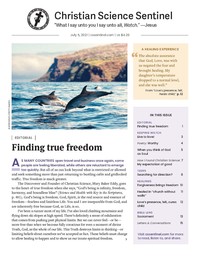