Christ’s advent wasn’t what people had expected, but it would prove to be what they needed.

One of the most cherished symbols of Christmas for Christians the world over is the nativity scene—a depiction of Mary and Joseph and the infant Jesus attended by shepherds as well as the wise men who had followed the star to witness the wondrous event. At the center of many of these scenes is a manger holding the precious babe. It lends simplicity to the scene. But it also exemplifies something else—the meekness and humility that always accompany the coming of Christ, the dawning of divine inspiration in human consciousness.

Whatever Mary’s expectations might have been for the birth of her child—the babe who would be called the King of kings—it’s hard to imagine that delivering him in a barn, then laying him in a feeding trough intended for livestock would have been her preference. Yet, with no rooms available in the inn, she had little choice. 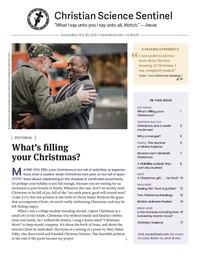