Corrie ten Boom and her family were heroes of the Dutch resistance during World War II. They hid many Jews and helped them escape to safety. Eventually Corrie and five members of her family were arrested; later, Corrie and her sister Betsie were sent to a death camp, where Betsie died. After the war Corrie spent the rest of her life traveling around the world speaking about God’s forgiveness, the need for reconciliation, and her experiences with love overcoming evil.

At the ten Boom house in Haarlem, Netherlands, there’s an exquisitely framed embroidery of a crown. During talks, Corrie would hold it up, first showing the backside of the embroidery where hundreds of tangled colored threads hung in a mess. Then she would flip it around to reveal the beautifully stitched crown. She said we often view our lives from the tangled side, whereas God views our lives as the perfectly woven crown. She invited audiences to see their lives from this divine perspective. This perspective enabled Corrie ultimately to forgive the man who’d betrayed her family to the Nazis.

Send a comment to the editors
NEXT IN THIS ISSUE
Bible Lens
Bible Lens—March 23–29, 2020 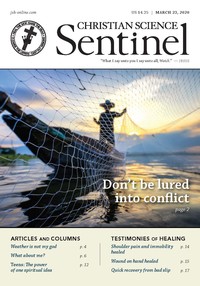