One time, my husband and I were climbing Half Dome, a peak in Yosemite National Park in the United States. At the base of the final summit we were stopped by a warning sign: “If a thunderstorm is anywhere on the horizon, do not pass beyond this sign.” Exposure to lightning strikes was considered a real danger.

Since then, I’ve thought about that sign as a symbol for times when storm clouds have appeared on my mental horizon. Major events in my life—buying a new house, receiving a promotion at work, getting married, having a baby—have sometimes brought with them my own fears as well as judgment from others. Like a hiker at the top of Half Dome during a lightning storm, I’ve felt exposed and vulnerable. 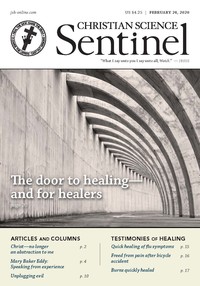