“Getting right yourself” and the widow’s mite

Lately, my mother has been sharing more of her childhood stories with me, events that had real meaning and importance to her. Her father (my grandfather) was a wealthy industrialist who owned a garment factory in Hong Kong, so their family lived a pretty comfortable and privileged existence.

When my mother was a young woman, her father hosted a large wedding party for her sister. He had invited all the relatives in the surrounding area to the reception. Now, it’s customary in Chinese weddings to give money in a small red envelope, called a hóngbāo. The amount given should cover the cost of the giver’s attendance at the banquet as well as a little extra spending money for the newlyweds. At the end of the wedding festivities, my mother was helping my grandfather record what had been given. She came across a red envelope that had inside it a single coin of the least value (equivalent to twenty cents American by today’s standard) and a common bobby pin. She exclaimed, “What a stupid and insulting gift!” She was startled when her father immediately rebuked her. He explained to her how poor the relative was and that the twenty cents and the bobby pin represented the only thing of value he had to give. My grandfather expected her to honor and respect this relative’s gift. 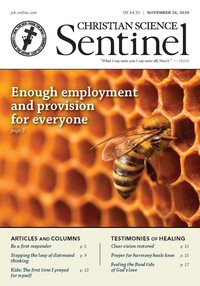