Some time ago I had a lightbulb experience that has remained quite helpful to me. I had a pain, and I gave myself Christian Science treatment—prayer based on the fact that God is infinite good and never creates discord or disease. For a couple of days I affirmed the truth that man is spiritual, not material, and that there is no sensation in matter—thus denying the possibility of pain.

Initially, the pain lessened, but after a while it became more pronounced and limited my movement. It was at this point that I realized I was feeling generally out of sorts, with various worries intruding on my thought. Then came the moment of inspiration. I realized I could not possibly heal pain while believing that I was separate from God. I needed to be aware that as God’s child, I am at one with Him, and thus express Him always.

Send a comment to the editors
NEXT IN THIS ISSUE
Image and Inspiration
'O send out thy light and thy truth ...' 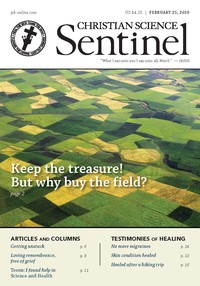