“I don’t expect you to return the favor,” the note said, “but I just wanted to let you know that I have been watching you for two years, and I think I like you.”

I didn’t really know the guy who sent me the note, but I jumped at the opportunity to go out with him, thinking that I had finally found my “prince.” I felt like he was what I’d been searching for all through high school—some guy who would be everything to me, like I’d always seen in movies. I’d dated other guys in the past, but no one had ever turned out to be that perfect person who totally understood me and who I could lean on 100 percent.

I figured I could get to know him if we went out, and everything started slowly at first. Then our relationship became public, and I even thought I loved him. But as the year went on, I didn’t love who he was becoming.

Still, I ignored it, telling myself that he wasn’t really like this, or that the things I didn’t like were just an act he was putting on.

“He doesn’t respect you,” my friends told me.

They even said, “He’s kinda creepy.”

But I ignored what my friends were saying, too, and refused to think about anything other than the fact that I had finally found my “prince.”

As the school year came to a close, he said some things that were really hurtful and some that made me feel uncomfortable. But once again I ignored all that and just hoped we would go our separate ways for the summer, and we’d be OK when the next school year started.

I didn’t have my phone at camp or while I was on a service trip in Peru that summer, so I didn’t have to worry about whether I was missing texts from him. But with some distance from the relationship, it was harder to ignore the things that he’d done that weren’t right.

I could see the importance of listening only to God, but I had to start doing it.

On one of our first nights in Peru, we did a writing activity in which we wrote down something that we were struggling with. I wrote about the problem I was having in my relationship with him. This time, when one of my friends on the trip told me, “You don’t deserve this,” I woke up a little and actually started to believe it. Later in the week, during my Christian Science Sunday School class, we read a passage from Science and Health with Key to the Scriptures by Mary Baker Eddy that had one particular phrase that really stuck with me. It refers to the value of “turning to no other but the one perfect Mind” for guidance (p. 467).

From attending Sunday School, I knew that the “one perfect Mind” is God, and I realized that I had been doing the exact opposite of what this phrase suggests. Instead of being guided by God and listening to God’s thoughts, which are always wise and full of love, I had been turning in every other direction. I had been listening to my own fears, desires, and opinions, as well as to what my boyfriend was saying, and ignoring everything that didn’t match up with what I thought I wanted.

I knew from other experiences that God really is reliable and that I can trust Him. So from that moment on, I knew that I needed to change my approach to the relationship and start listening to “the one perfect Mind” instead of being influenced by my own emotions or what anyone else was telling me.

Admittedly, this was a lot easier to say to myself than to put into action. I could see the importance of listening only to God, but I had to start doing it. So I tried to do it in small ways throughout each day. It wasn’t always easy, but as I continued to hold to this idea through the rest of the summer, I found that I was able to apply it to other aspects of my life and to feel more confident about hearing God’s guidance.

As the summer came to a close, I heard the calm, clear voice I’d come to recognize as God’s simply say, You know what to do. And with that thought from “the one perfect Mind,” I made one of the most peaceful calls of my life and ended our relationship.

Even though I didn’t have a boyfriend to lean on after that, I learned that I can lean on God 100 percent. And I know now that I can always trust God to guide me. 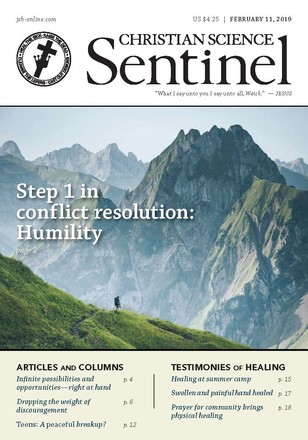 Infinite possibilities and opportunities—right at hand

Dropping the weight of discouragement

Caring for the children: Wisdom, humanity, and the heart of Christian healing

From the Office of Committee on Publication | February 2019