I grew up in a dedicated Christian Science family. My mum left her hairdressing business to become a Christian Science practitioner when I was very young, and my dad had been a Christian Scientist since very early in their marriage. This meant that Christian Science was always talked about in our family; it was just a natural part of every day. By the time my sister and I were in secondary school, we were also attending Wednesday evening services consistently as a family.

Looking back, I’m so grateful that my parents were so diligent about making Christian Science second nature to us. However, there came a point in my teens where I wasn’t so happy about it! I was in sixth form in the United Kingdom (the equivalent of the last couple of years of high school in the United States), and I was taking philosophy classes. The person I sat next to in class was a Christian, but the rest of the class was either agnostic or atheist. The teacher also showed an atheist bias. I remember that for a few months the focus of the class was “the idea of God.” My Christian friend and I felt lambasted with questions and criticism, as the rest of the class inspected and dissected the arguments for and against the existence of God. 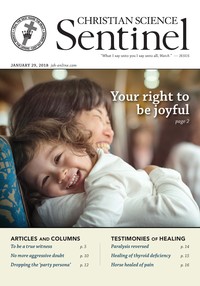