How do you know that?

If you start from the wrong premise, even sound human reasoning doesn’t lead you to a real understanding of things. That’s especially true when the wrong premise is a determination to draw conclusions from mere material observation and evidence.

A frequently cited example are the cargo cults of the South Pacific. During World War II, allied forces built airstrips on several islands to help with supply routes. Certain tribes there became accustomed to having some of the cargo given to them. When the war was over and the planes stopped coming, the tribes tried to find ways to make the planes come back. So they built their own primitive runways, lined them with torches, and sat in wooden huts with wooden blocks over their ears, mimicking the motions of an air traffic controller. But no planes came.

Send a comment to the editors
NEXT IN THIS ISSUE
Bible Lens
Bible Lens—July 24–30, 2017 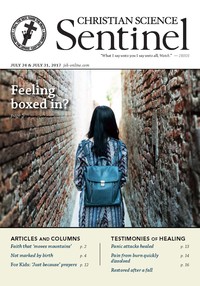