What would you say if someone suggested that you write an article or a testimony for this magazine? Would you react with dismay and exclaim, “Who, me?”

I was a college student here in England when someone first made the suggestion to me. At that time there was an occasional series in this magazine called, “A college student writes.” One day I remarked to a friend, who was also a fellow member of the Christian Science organization at my college, that the articles in this series were written from the perspective of the American higher education experience. It would be nice, I added, if some were written from an English perspective. This friend, looking me straight in the eye, suggested that I write an article myself. That was when I exclaimed, “Who, me?” But she had sown a seed.

Send a comment to the editors
NEXT IN THIS ISSUE
How I Found Christian Science
Purpose found: inspired to heal 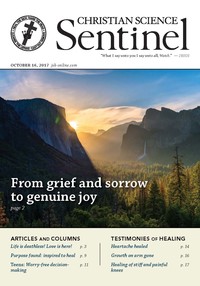