Injuries related to a fall healed

On a recent business trip my colleagues and I had to change planes in Germany on our way from the United States to the Middle East. While disembarking, I tripped and fell down the plane’s mobile stairway. With the help of my colleagues, I managed to make it onto the bus to the terminal, but I noticed that my hand was bleeding, I had twisted both of my ankles, and I was on the verge of fainting. While losing consciousness, I had only one thought: I am in the consciousness of divine Love.

I awoke as an ambulance delivered me to an emergency room at the airport. I asked them to bandage the bleeding wound on my hand but otherwise not to run any further checks. At my request, I was then taken in a wheelchair (I could not stand up) to an airport hotel, where I would stay until the next flight to the Middle East the following day. 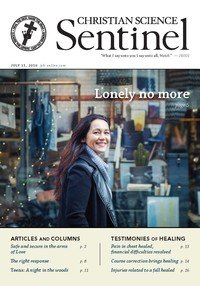