When I was in the US Foreign Service, working at embassies abroad, I had the protection of diplomatic immunity. This legal immunity, derived from the 1961 Vienna Convention on Diplomatic Relations, allows diplomats serving in a foreign country to go about their duties without interference from local laws or officials. The protection granted by international law is especially important to diplomats operating in nations hostile to their own governments and policies.

Recently I realized that, generally speaking, a diplomat’s situation is a lot like the human situation itself. Though it appears that we are subject to the so-called laws of sin, sickness, and death, we are actually the representatives of divine Spirit and have immunity from these supposed laws of matter. Wherever we go and in whatever situation we find ourselves, we remain subject to the spiritual laws of God alone, at all times. 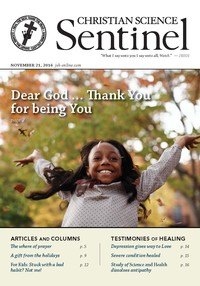