Healed of flulike symptoms while traveling

Several years ago my job required me to fly periodically between South Africa and the United States. On one such trip, I flew from Washington, DC, and landed for a layover in London at dawn. Since my next flight to South Africa did not leave London until midnight, I took a tour of the city. When I returned to the airport several hours later, I was very ill with numerous flu-like symptoms.

I felt so ill that I didn’t feel I could pray for myself, nor did I feel strong enough even to find a telephone to call a Christian Science practitioner. Instead I found a quiet corner of the airport, stretched out on a bench, and tried to sleep. But after several hours of feeling increasingly miserable, I knew I had to either delay my flight and find a nearby hotel to rest for the night or begin to pray scientifically for healing, as I had learned to do in Christian Science. 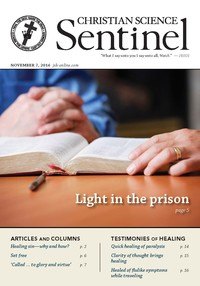