The Christ in my life

Last year I began a study abroad year at a university in Munich, Germany. In the first month, I immediately had many opportunities to learn more about God, to put into practice what I was learning, and to experience healing.

One morning in the third week after my arrival, I woke up early and felt extremely lonely and homesick. I had been feeling this way a lot and it came in waves—some days I would be really happy and grateful to be abroad and then a second later I would feel overwhelmed, sad, and alone. I had prayed a lot ever since I got to Germany, but quite honestly I don’t think that I had been living consistently with my prayers (see Mary Baker Eddy, Science and Health with Key to the Scriptures, p. 9).

Moriah Early-Manchester is a student of Global Perspectives and Educational Studies at Principia College.

Send a comment to the editors
NEXT IN THIS ISSUE
Bible Lens
Bible Lens—June 22–28, 2015 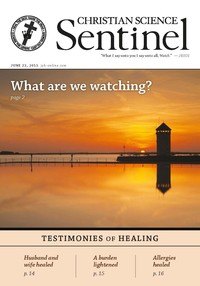