In this column, readers get a new look at a few of the many articles on JSH-Online.com that have particular relevance to contemporary needs.

One who suffers from mental confusion, memory failure, an inability to respond to simple orderliness—what to do and how to do it in the common routine of daily living—is being confronted with temporary lapses in his sense of identity. Depending on the circumstances, the effect is mental conflict as to one’s being, location, relationships, purpose, and motive. Extreme cases present a picture of substitutive identity, where the sufferer is convinced he is someone he is not.

The remedy is to gain a clearer sense of one’s true identity, and this is a goal everyone should achieve. The dream of mortality itself is a deluded state. Every disease is evidence of mistaken identity. And sin is the same, though more serious. Mary Baker Eddy, who discovered and founded Christian Science, reminds us: “There are many species of insanity. All sin is insanity in different degrees. Sin is spared from this classification, only because its method of madness is in consonance with common mortal belief.”Science and Health with Key to the Scriptures, p. 407; 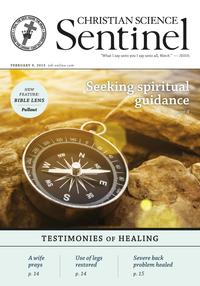