“Clean hands and a pure heart.” The Psalmist tells us that’s what we need in order to “receive the blessing from the Lord” (Psalms 24:4, 5, citation 9). And this week’s Christian Science Bible Lesson, titled “Sacrament,” overflows with examples of the blessings that purity brings!

Take the story of Naaman for example (see II Kings 5, cit. 4), who was afflicted with leprosy. His path to healing began with the servant girl who waited on his wife. The two couldn’t have been more opposite. Naaman was a “great man,” she was a nameless “little maid;” he was a captain, she was a captive; he was from victorious Syria, she was from lowly Israel. But her confidence in God’s healing power led Naaman to Elisha, the prophet. And after a breakthrough lesson in humility and obedience, Naaman was indeed healed. His skin became clean and pure like “the flesh of a little child” (verse 14)—like the little maid. No longer ignorant of God, Naaman glimpsed the salvation that is “Life, Truth, and Love understood and demonstrated as supreme over all; ...” (Mary Baker Eddy, Science and Health with Key to the Scriptures, p. 593, cit. 7).

Kathleen “Kat” Collins is a Christian Science nurse and has a master’s degree in Bible studies. She lives in Godfrey, Illinois. 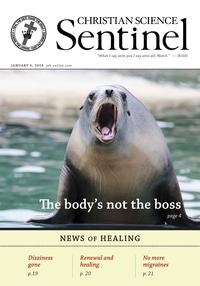