The book Science and Health with Key to the Scriptures is packed with Bible quotations, allusions, and references. Author Mary Baker Eddy was a lifelong student of the Scriptures. A biographer writes, “All her life the Bible seems to have formed another dimension of reality for her” (Robert Peel, Mary Baker Eddy: The Years of Discovery, p. 127). Mrs. Eddy’s exposition of biblical passages is a particularly rich resource for students of her book, and this week’s Bible Lesson, titled “Mind,” includes several of them.

For example, in Exodus, Moses encounters God at the burning bush (Section 2, citations 5 and 6) and is commissioned to “bring forth … the children of Israel out of Egypt.” But Moses exclaims, “They will not believe me.” God commands him to throw down his shepherd’s staff, and Moses runs away when it turns into a snake. Science and Health explains: “When, led by wisdom to cast down his rod, he saw it become a serpent, Moses fled before it; but wisdom bade him come back and handle the serpent, and then Moses’ fear departed. In this incident was seen the actuality of Science. Matter was shown to be a belief only. The serpent, evil, under wisdom’s bidding, was destroyed through understanding divine Science, and this proof was a staff upon which to lean. The illusion of Moses lost its power to alarm him, when he discovered that what he apparently saw was really but a phase of mortal belief” (p. 321, cit. 6). 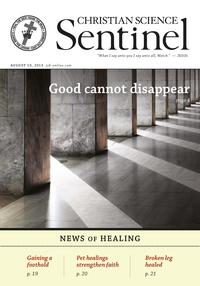