Imagine this scenario: You’re a law-abiding citizen; you have a job, pay your taxes, help your friends, and live a productive life. One day, a couple of police officers come to your door and accuse you of robbing a bank, placing you under arrest. It’s clear to you a mistake has been made. What is your response? Do you admit guilt? Meekly submit to the arrest and spend the next ten years in jail? Not likely. Instead, you would proclaim your innocence, protest the injustice, call a lawyer, and fight for your right to be free.

What if the police claimed to have evidence of your guilt, such as witnesses and camera footage? Would you begin to wonder if you actually had robbed a bank? Or would you still know beyond a shadow of a doubt that you had committed no crime? It’s not inconceivable to think that you might begin to question your own innocence. Suspects have been known to confess to crimes they didn’t commit when under intense interrogation.

Debbie Whitler lives with her husband, three children, and many pets in Goodyear, Arizona. 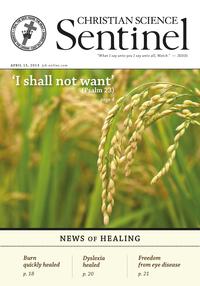