Stagnation, deflation, and a spiritual perspective

An editor of The Christian Science Monitor once remarked to me that he often had to back off from the news to consider what was really happening. We were discussing how the news agenda is largely set by the government in power, followed by the television networks that have mass audiences, and then by special interest groups having the funds to promote the issues important to them. What he meant, though, was that not only did he have to consider whether he was missing something of long-run importance that needed coverage but also that he needed to discern the mental thought-forces behind each issue.

In this current period of economic uncertainty—coupled with a certain wartime atmosphere of indefinite duration—there has even been talk of the possibility of deflation. My editor friend's remark came to mind in thinking about that word, deflation. It is, of course, the opposite of inflation, a phenomenon most of us have come to think of as permanent. In inflationary times, the value of money declines as prices rise. The opposite holds true in a deflation—the value of money increases, but prices on the whole drop. 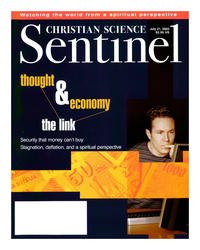