Once green with prejudice

My Wife And I Moved from Chicago to Boston about 20 years ago. From the city of (the original) Mayor Daley and bright green water in the Chicago River on St. Patrick's Day, to Boston, the city of Irish-American politicians, the heavily Irish neighborhood called Southie, Irish pubs, and traffic rotaries (nothing exclusively Irish about the latter, but they bedevil newcomers and natives alike). Two years later we moved to Quincy, just south of Boston. Quincy is where many descendants of Irish (and more recently Asian) immigrant families relocated when they could afford to leave their city enclaves. Most of our neighbors had Irish surnames.

Cultural Irishness wasn't a problem for me. I have Irish ancestors myself, and while two years in army olive drab took their toll, I still loved wearing things green. What troubled me most was the dark side of clannishness, which at that time was being played out in its worst form as tribal violence in Northern Ireland. Republicans hating Unionists and vice versa; Protestants hating Catholics and vice versa—it all seemed so irrational, the antithesis of Christianity. And then somewhere along the way I realized that I, too, was hating—and hating the fighters instead of hating the hatred. That got me to looking within, and praying. And I saw the prejudice dissolve. 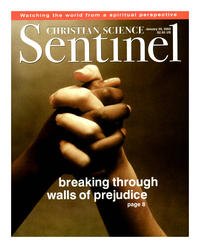