King Saul, a revered figure in the scriptures, was troubled by evil spirits. When he heard about David, a young man who could play the harp quite well, he asked him to play for him when he was troubled. David did so, and Saul found that the harp playing lifted his depression (see I Sam. 16:14–23). Why would harp music bring healing? As a harpist, I'm aware of the peace I gain whenever I play. And the music has brought joy and comfort to listeners who were struggling with challenging physical or emotional problems. But I was looking for a clearer sense of what made the harp playing so important to healing in that Bible account. Simply playing an instrument isn't enough to bring lasting peace; sometimes it results in discord, frustration, or anger. So what was different about this harp playing? David wasn't just a local musician who made his money by performing. In fact, his primary work until then was tending his family's sheep. But the Bible describes him as "a mighty valiant man, and a man of war, and prudent in matters, ... and the Lord is with him" (I Sam. 16:18). He regularly turned to God for guidance and protection, and everyone knew it. When he was guarding his sheep, both a lion and a bear tried to attack, but he was able to protect his sheep through his trust in God's ever-present power. And he often acknowledged God's power, presence, and goodness by singing praises to God on the harp.

Send a comment to the editors
NEXT IN THIS ISSUE
Article
Afraid of losing someone dear? 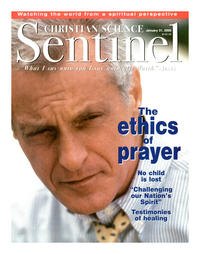