While I was still a new student of Christian Science, a small...

While I was still a new student of Christian Science, a small infection appeared in the cuticle of one of my thumbs. I did not think much of it until the thumb was twice its normal size and so painful that I could not sleep. Because I used my hands a lot at work, it was difficult not to aggravate the pain during the day.

I called a Christian Science practitioner for treatment. For a while there was no improvement. I was struggling to meet all my obligations and feeling quite sorry for myself. Eventually my whole arm became inflamed, and I became alarmed when it appeared to me I might even lose the arm. I called practitioner to report the situation as well as my fearfulness. Her response was so loving and reassuring that, while I was still on the phone with her, I became completely free of fear. 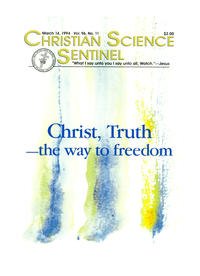