Not long ago, it would have seemed impossible: the headquarters of the "Stasi"—the dreaded East German secret police—abandoned by its occupants.

Since the dissolving of the East German communist government and the reunification of Germany, the empty headquarters has become another symbol of a failed ideology. Governing citizens through intimidation simply doesn't last.

Send a comment to the editors
NEXT IN THIS ISSUE
Article
Who was Martha? 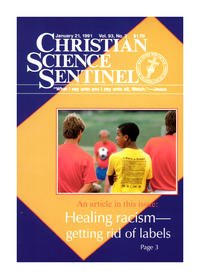