What does it mean to be a real woman?

Physical appearance and attractiveness do not define our womanhood. God does.

"Now there's a real woman!" How often have you heard that said about some attractive woman? But is that true? Is our womanhood (or manhood for that matter) dependent upon our physical appearance and attractiveness to the opposite sex? Many television programs, movies, books, and advertising campaigns try to tell us "yes." However, more and more people are experiencing the unhappy effects of such an outlook. Feelings of loneliness, lust, emptiness, helplessness, and obsession with the body often drive them to seek a deeper view of who they really are. I know!

As I entered adulthood, I brought with me the misconception that sensuality was part of true womanhood. The more adult and "womanly" I viewed myself, the easier it became to relax my moral standard until chastity was a thing of the past, even though I knew that wasn't in accord with what I'd learned in Christian Science. Throughout my single years, I had the desire deep down to be lifted above this immoral activity. I often struggled alternately with self-justification and then guilt. I knew that I really needed to base my moral standard on an understanding of God and of spiritual law, rather than on human will or opinion (which I found collapsed during times of temptation). 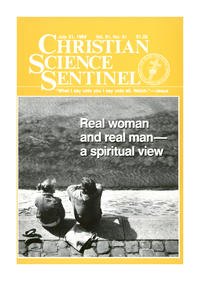