Often, the Gospels say, crowds followed Jesus. They listened to his message and witnessed healings. Farmers, merchants, craftsmen, fishermen, even women and children heard him. When he spoke in the synagogue, the people were amazed at his teaching, "for he taught them as one that had authority." Mark 1:22.

Sometimes there were Pharisees in the crowd. They were highly educated men, an elite group who taught and interpreted Jewish religious laws. Since they believed that observing hundreds of ceremonial rules and rituals fulfilled God's will, they doubted that Christ Jesus' message had divine authority. They were disturbed by his failure to observe their rigid rules—for example, when he healed people on the Sabbath.

Send a comment to the editors
NEXT IN THIS ISSUE
Article
Testimony overdue? 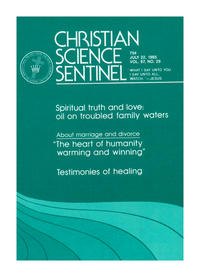