In ancient Greek mythology, Pandora was depicted as the first woman to be created. Each of the various mythical gods bestowed gifts on her, including a pottery jar from Zeus. The legend relates that this jar, or Pandora's box, held all manner of ills; and when Pandora opened the jar, the evils and diseases were released to plague humanity. This is but one of the many myths that have been devised in mankind's attempt to explain evil.

Christian Science, however, has removed the mystery about evil by revealing the true nature of reality. Reality is good only— spiritual and divine. It is that which is eternal; that which is formed by and included in the divine Mind, God. Whatever would claim to exist contrary to this spiritual truth of being—the absolute goodness of God and His creation—is utter falsity. And thus evil, or error, can be proved to be a lie, a pretense and illusion, a misperception of what is real. 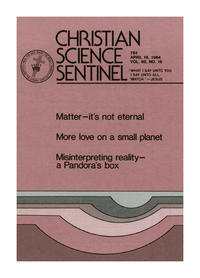