Seeing man as he really is

During a crowded noon hour in the business district of a large city, my attention was caught by the sound of a man's voice, shouting, "Jesus is my only friend." I finally caught sight of this man, who appeared to be a derelict. Although his message could certainly be heard, no one even glanced his way. It was as if he simply were not there. Yet there he was, shouting continuously, "Jesus is my only friend." Yes, I thought, Jesus probably is your only friend.

This incident arrested my thought. I recalled the incident in the Bible, when Jesus was asked, "Who is the greatest in the kingdom of heaven?" He called a little child to him, and then stated, "Except ye be converted, and become as little children, ye shall not enter into the kingdom of heaven." Matt. 18:1, 3. As I pondered this, I thought: Jesus was not commending simply a mortal child. He was recognizing the child of God, the pure representative of God, which he knew as the true selfhood of everyone—even of everyone present in that crowd. Basically, Jesus was correcting mortal thought, or the concept of man as material. Mortal thought must be converted before it can behold God's child, man in His pure likeness. 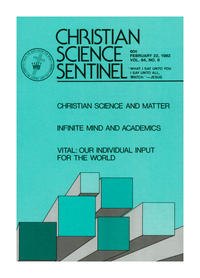