As a young boy I attended a Protestant Sunday School until I was ten years old. Although I enjoyed this experience, it was not until I attended the Christian Science Sunday School that I began to really progress in my understanding of God. My first day there I learned the synonyms for God that Mrs. Eddy gives us in Science and Health, and something of man's relationship to his creator. The next week my mother asked if I would like to go back to my original Sunday School or enroll as a regular pupil in the Christian Science Sunday School. Without hesitation I replied that I would like to continue with Science. That first Sunday I had been amazed at how much my fellow pupils in class knew about God and His Son, Christ Jesus. I learned to love Christian Science and its Discoverer and Founder, Mrs. Eddy.

Shortly after this my seven-year-old brother was run over by a truck. The rear wheel rolled over his pelvis. He was taken to a hospital. A surgeon examined the child and advised my parents that his pelvis was so badly crushed they would be unable to shape it so that he could walk again. The doctors pushed the pelvis back into place as best they could and put the youngster in a cast. My parents then requested that a Christian Science practitioner pray for the boy. The omnipotence of God's law acknowledged in this prayer nullified the surgeon's verdict, and my brother was able to walk normally again. There was no limp or any other aftereffect of the incident. My parents credited Christian Science with this healing, which made a vivid impression on me as a boy and became a bulwark for future healings of my own. 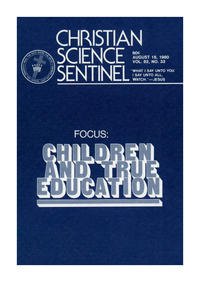