How can I tell the many blessings that have come to me as a...

How can I tell the many blessings that have come to me as a student of Christian Science! Although I was reared as a Christian Scientist and had several healings when I was small, I only began to recognize its potential for good when I entered college a hundred miles from home. Then I had to demonstrate its practicality for myself. And what wonderful experiences I have had since that time! Having been surrounded all my life with people who loved me and catered to me, I felt quite alone and unhappy at leaving home. However, after realizing that homesickness and loneliness were only arguments that I could be separated from God, I became one of the happiest girls on my corridor of the dorm, and the only one in our group of friends who remained at the school after our freshman year!

My grades improved in a steady progression as my understanding of my relation to God has grown. My studies became wider avenues to greater understanding through the application of Christian Science. I had an English class in my freshman year in which I was receiving average grades. As the class progressed I found myself more and more critical of the professor, and remarks he made antagonistic to Christian Science increased my dislike of him. But while I was taking the final I was thinking over the situation. I reasoned that if I couldn't improve my grade in the class, as it was so poor, I should at least get something out of the class. So during the remaining three hours of the final I corrected my false opinions of the professor. I felt that indeed I had gotten a great deal out of the class, for I had begun to see man as God has created him— perfect. I knew the healing had been complete when I received a high grade for the course.

Send a comment to the editors
NEXT IN THIS ISSUE
Testimony of Healing
"My cup runneth over" (Ps. 23:5) with the understanding of... 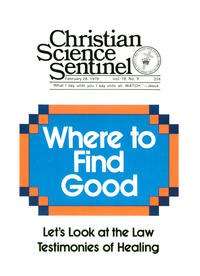