Perhaps it was because what happened took place so close to where I live. Or perhaps it was just the culmination of those tragedies and near tragedies that have centered around public figures in recent times. I do not really know. But it was the attempted assassination of Governor George Wallace, during his campaign for the Presidency of the United States this year, that made me remember those three things I know I shall never again forget.

First, I remembered what I had promised myself long ago. At the time I turned wholeheartedly to Christian Science as a way of life I was happy in my job. Politics was my first love. I worked in a large political headquarters and came in frequent contact with governors and senators, congressmen and mayors, incumbents and hopefuls. I had the opportunity to see deep into the heart of things political, and I did. There I found both strength and weakness, integrity and dishonesty, forthrightness and cunning. But the most vivid impression I had during those years was not the inconsistencies in the character of the elected but rather the consistency in the character of the electorate. It could be summed up quickly in three words: apathy, ingratitude, and more ingratitude. 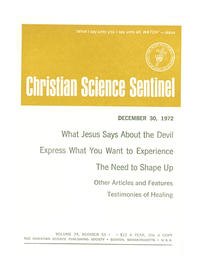