with contributions from Charles E. Raven

"The believer and belief are one and are mortal," declares Mrs. Eddy on page 487 of "Science and Health with Key to the Scriptures." The finity, mortality, of a belief is not difficult of comprehension to any one who has had even a glimpse of reality in Christian Science, and of the power of an understanding of Truth. The mortality, the actual nullity, of the believer is, however, not often comprehended so speedily. It is generally supposed that man is free to believe whatsoever he will. This is partly due to a misconception of man's true identity, and partly to some confusion regarding the word "belief." In the course of her answer to the question "Who or what is it that believes?" from which we have quoted above, Mrs. Eddy explains that, in the Bible, the words "believe" and "belief" often have a deeper meaning than that which ordinarily attaches to them in the speech of to-day; but as generally understood in Christian Science and as employed in this quotation, "belief" signifies credence that has been given to an erroneous argument, a credence not based on understanding but on ignorance and fear. The supposition that man can belief what is suggested by ignorance or fear, by animality or hatred, by selfishness or immorality, is false. For man can do no less nor more than God has formed him to do, and these suggestions and the beliefs they breed are no part of Mind or of its idea, man. Man, then, is not the believer, and the student reaching this point of enlightenment echoes the question that Mrs. Eddy has answered: "Who or what is it that believes?" 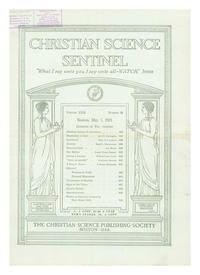