Until "Science and Health with Key to the Scriptures"...

Until "Science and Health with Key to the Scriptures" was written by Mrs. Eddy, the wonderful healing works of Jesus, his immaculate conception, resurrection, and ascension, his walking the water and stilling the storm, together with the prison experiences of Peter and Paul, were utterly unexplainable. These acts have been looked upon as marvelous or spectacular contraventions of the natural laws of Deity, to exemplify some inscrutable power with which men were to have no part except as bewildered beholders. But, when understood, Mrs. Eddy's explanation of Spirit or Mind, and what is called matter, gathered wholly from a spiritual discernment of the Scriptures, unlocks the whole mystery whereby the so-called marvels are discovered to be the natural manifestation of divine or spiritual law, operative in human consciousness through the understanding of God. This discernment elevates the Scriptures above and beyond the realm of faith into visible demonstration. 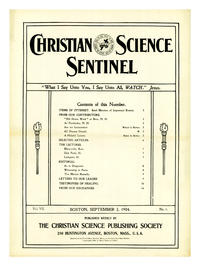