Having had almost continuous consciousness of health during seven years of Christian Science experience, and therefore so few demonstrations over physical errors to give, and yet desiring to add my mite to the support of our periodicals, it has become clear that the expression of an awakened and regenerated thought, is a contribution; also that as it is not difficult for a plant, nourished by the sun and dews of heaven, to bud, expand its blossoms, and throw open its heart laden with fragrance to a waiting world; so the Christian Scientist, nourished by his daily food of truth, should find no difficulty in giving to a waiting world the results of daily growth, fragrant with the perfume of Love. It should be a glad outpouring of that which has been received, assimilated, and increased tenfold, until there is no room in consciousness to hoard it for one's own use, but one realizes that it must be given out freely and unselfishly to swell the voice of that mighty testimony that is filling the earth with its notes of joy and peace, sweeter than any sound that has yet reached the human ear, telling of freedom from the bonds of false thoughts of God and man.

Obedience to a lie is the enslavement of hypnotism, and mortal man has therefore during all his seeming span of earthly existence been under a hypnotic spell, for he has been believing a falsehood about God and man. He has been believing that there are mortal, physical laws which he must obey, when all the while the truth remains that there is but one law, the law of Spirit. This truth appears first to mortal man as a faint light, and as he follows it, guided by divine wisdom, it grows brighter. He realizes the impotence of the supposed laws which he has heretofore obeyed, and rejoices in the growing sense of freedom from material beliefs; he realizes the utility and practicality of the law of Truth and Love in his daily affairs. The burden of fear is lifted from shoulders bowed beneath its load, and the things that once seemed real, are understood to be mere ghosts of mortal belief. He learns to walk leaning more and more upon the One Mind, One Love, for guidance and support: his constant endeavor is to realize his unity with this Mind, Love, and to understand the wondrous meaning of "God is All," which understanding will usher him out of the realm of unreality into the kingdom of reality where no intruding belief can mar the perfect harmony of spiritualized consciousness. 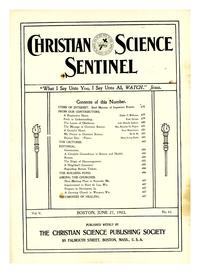