"A lot of rumpus is being made," said a retired commodore to-day, "about the army suffering all sorts of things by the abolition of the canteen, and predictions are frequent that troubles will be encountered in securing enlistments because it is no longer to exist. The navy has no canteen and sailors have very little chance to get drinks, and still we have no toruble in getting all the material we wish for the service. Just after the Civil War, when there was unquestionably a great deal of intoxication in the navy, both among the officers and men, the grog system was abolished by act of Congress, and since that day not a drop of liquor is allowed sailors when on board ship."—Boston Transcript's Washington correspondence.

As interpreted by War Department officials the canteen clause of the army reorganization bill will result in abolishing the sale of liquors on all military reservations, whether used by soldiers or purchased by others. Orders will be issued immediately on the passage of the bill, shutting up every barroom at military stations and refusing hotel proprietors at Fort Monroe, West Point, and Fort Leavenworth, which are maintained on land belonging to the government, the further sale of all liquors. 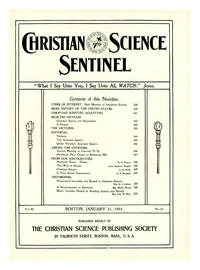