The Mail and Express

It is he who is responsible for most of the religious indifference of the day. He is so talkative, this questioning Thomas. For the last decade "critical doubting" has been the shortest road to notoriety—which is the mere spook of fame, to be sure, but is valuable commercially. The endless questioning whether there be punishment in a future world; the prattle about "higher criticism" that has been on Thomas's tongue with little study as to what it means, except a general aspersion of the Scriptures; the utterance of postulates followed by long statements of conclusions to these loud-sounding subjunctives—all this process is bearing fruit. A multitude of busy people wake every Sunday morning with a queer sensation. "This is the holy day—or it used to be called holy. It is the day for church. But what do they set forth? Who is settled enough in his own belief to guide mine? It is, with some exceptions, probably, the day for questions about religion rather than the assertion of religion."

Perhaps all this could not be otherwise. Possibly it is the dust in our orbit through which the globe must pass. But it is not the less unfortunate. It is the real cause of non-churchgoing. Man is rational. If he is to do a thing, he asks, "Why am I to do it?" If he is to go to church, the object is a rational consideration. Suppose, therefore, he concludes, "I will wait till these people settle upon something. Then I will go and receive it at their hands." The average merchant is too much fatigued by his secular work to enjoy metaphysics or discussions that rest his tired wing nowhere. Nor is he fitted by mental habitude for the process. It simply increases his religious confusion. In the division of labor he pays his pew rent, or his subscription to the theological schools or denominational press, and wants to buy products that are real. 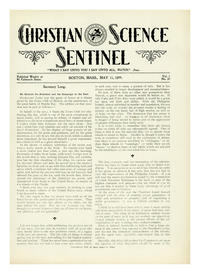