An article appeared in the Pittsburg daily papers about the pupils in the Normal School at Indiana, Pa., being poisoned through the food in some way. My daughter attends this school, and was the only one who ate of the food and was not ill. I felt that this demonstration of the true education in Science being a protection would be interesting to the Field. My daughter was five years old when we first came into Science. She is now seventeen. Was it not a fulfilment of the promise, "If they drink any deadly thing, it shall not hurt them"? I will give her own words as written to me.

"Now I shall tell you all about the poisoning business. Two weeks ago, a great many of the girls were very sick, and last Sunday the same thing happened again. Of course all of the girls said it was poison, but they did not know. Then Dr. W. thought it was time to do something, and the faculty appointed three men from town to examine into things, and they had all the girls and boys who had been sick come to the office, and asked them just what they ate both times. As my room-mate had been ill she went down. They asked her if she knew any one who had eaten everything, and still was not sick. She said she did, and named me. They asked her if she knew why I was not sick and she told them I was a Christian Scientist. They then sent for me, asked me the same questions, and I gave the same answers. They concluded the poisoning must have been caused from the cooking utensils, but were not sure. The reason I was all right, was because I knew nothing could hurt me, and I did know it, but some of the girls were really sick (in belief), a great many fainted." 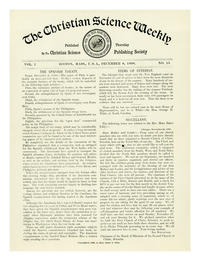