About two years since there was organized in Chicago a...

About two years since there was organized in Chicago a movement for the comparative study of religions and religious sects, under the general head of The University Association and World's Congress Extension. It is said that this educational movement was the outgrowth of the World's Congress held in Chicago during the Columbian Exposition. The Association publishes a monthly magazine called Progress, in each issue of which are published a number of articles or papers setting forth the religious tenets of the various religions. The principal objects of the movement is said to be to carry on the work of self-culture by individual effort, or in local centers, or organization, along the line of Normal School and University Extension; thus bringing our public schools and the higher institutions of learning into close relationship, and in turn stimulating the attendance of students upon them, and to aid the teachers of public and private schools in thorough and systematic preparation for their duties. These objects are being carried out by carefully prepared lessons by college and university professors; with side-lights, incidents, biographies, etc. Each paper or lesson is accompanied with questions, which are to be answered by the students where Association centers are formed. A resident instructor has been selected by the center, who will meet the members at stated times to discuss and review the subject studied. Quarterly examinations are held by the local instructor. At the close of each course of study an examination is held on questions furnished by the instructors. These questions are sent from the central office of the University Association to local deputy examiners, who conduct such examinations after the manner of the London University examiners, or after that followed by examiners for State Teachers' Certificates. Papers are then sent to the home office, where they are passed upon by the Educational Committee. On passing the stated examination at the close of each study, members receive a diploma, setting forth the work accomplished.

The tenth number of Progress, the monthly magazine of this Association, contains, among other interesting papers, an article on Christian Science, briefly biographical, historical, definitional, and statistical. It also contains a copy of the 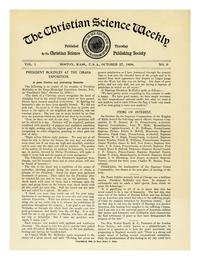