I envied people who were fearless and confident.

Before I began studying Christian Science, I was a very fearful person. Though comfortable with people on a one-to-one basis, I was terrified of doing anything in public. I avoided serving on committees, as I knew I would be tongue-tied. I declined to stand up and deliver a “vote of thanks” speech, and I didn’t even like making announcements. I wished I could speak up at a public meeting, but I couldn’t. I was even timid while driving. I envied people who were fearless and confident.

The Bible says, “Fear hath torment” (I John 4:18). I knew all about that! When I was living in the Middle East, where there was terrorist activity, my grandmother sent me a copy of Science and Health with Key to the Scriptures by Mary Baker Eddy. I read some of the book and learned that our relation to God as His spiritual reflection keeps us safe, and I was no longer afraid to go out. 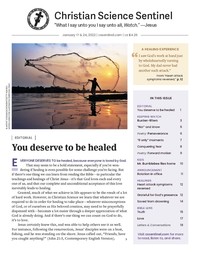